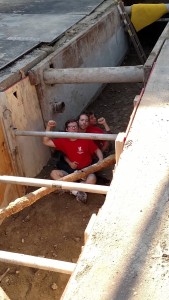 West Roxbury, MA, July 23, 2016 – Six people locked themselves together at 9:50 AM this morning to block two construction sites of Spectra Energy’s West Roxbury Lateral Pipeline (WRL), which would bring fracked gas into Boston. Bound at the waist and ankles using chains and superglue, they aim to stop the project from endangering the community and disrupting the climate. They are demanding that Spectra Energy keep fracked gas in the ground and stop forcing the project through a community that overwhelmingly opposes the pipeline.

Trevor Culhane said, “This pipeline would irresponsibly lock us into decades of climate pollution and community disruption. We need to keep fossil fuels in the ground and transition to a just and renewable economy without fracked-gas.”

This action was a significant escalation in the ongoing effort by the group Resist the Pipeline​, and follows months of rallies, protests, arrests, and vigils at the construction site. Residents of West Roxbury oppose this project, as do Boston Mayor Marty Walsh, Boston City Councillor Michelle Wu, and Congressman Stephen Lynch.

“Climate change upholds systems of oppression like white supremacy by allowing the consequences of its destructive practices to fall on the shoulders of low-income communities, indigenous communities, and communities of color,” explained Abbie Goldberg. “In the wake of so much violence and pain, I want to recognize the interconnection of these struggles and fight climate change not only for my own future, but for the possibility of a more just world for everyone.”

Two weeks ago, 23 people, including Karenna Gore, were arrested for blocking construction of the pipeline. In total, 144 others have been arrested in West Roxbury, and over 200 people regionally, in civil disobedience actions to stop this Spectra Energy project.

Bobby Wengronowitz, who will become a father in just a few weeks, took action “because cool heads and discussion have gotten us nowhere. I feel a responsibility to do whatever it takes to assure a livable future in this beautiful world for my child and for all those who have done nothing to contribute to the climate crisis.”

Jamie Garuti said, “We chose to take nonviolent direct action because despite widespread opposition and the incredible dangers of fracked gas, conventional channels have not been enough to stop this project.” The city of Boston is currently in a lawsuit with Spectra to stop the gas pipeline, but the legal decision is not expected to happen before the projected completion date. The peaceful protesters vowed to continue to fight Spectra and all those perpetuating violence through climate change.